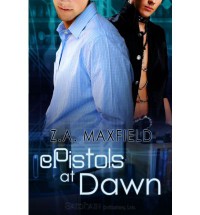 If you like a lot of melodrama, cheesy one-liners, eye-rolling moments, stupid character decisions, characters acting like children, and just an overall dull story, this book might be for you!

There were a few exciting moments, but in general I couldn't care less about any of the characters. It's kind of disappointing for me since I recall reading another of Maxfield's books that really struck some cords with me and I adore that book, but that book is definitely miles away from this book for me. I did have moments of enjoyments when the characters would perpetually fuck up and I'd see it coming from miles away. It's not like watching a car crash.. it's like watching a child eat tons and tons of candy and knowing they'll be sick later, but still watching them do it... and then when they're sick you're like "Ha. Knew it."

The characters are all dumb. All of them. And I can't connect with any of them or the situations or anything. They all annoy me. I hate Will in general, and I hate his relationship with Kelly. Their LOVE was mentioned I swear to god... at least four hundred times in this book. And after only one year of living together. Also Kelly had no idea how old Will even was. Ahhh, true love. I don't like Kelly, he's weird and apparently had a lot of disorders that aren't really too thoroughly explained. They aren't cute or endearing to me.. they're just annoying. I don't care about Shannon.

God, the sex scenes? They're like.. so awkward and awful and just...
Oh Jae, oh baby, Oh more, Oh deep, oh so good, oh so tight, oh so hot. But now imagine Jae's name ALWAYS in italics for some reason.

I don't want to talk about this book anymore.
Tweet